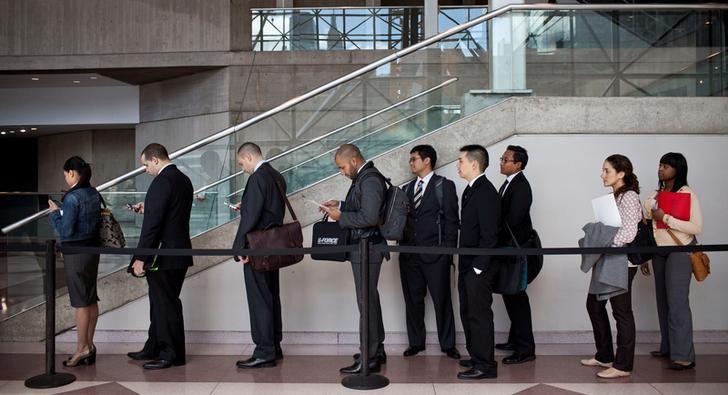 Initial claims for state unemployment benefits declined 25,000 to a seasonally adjusted 234,000 for the week ended April 1, the Labor Department said on Thursday. The drop was the largest since the week ending April 25, 2015, and unwound recent increases that had lifted claims to a three-month high.

“The lower jobless claims filings show the economy continues to show improvement which is important news with the long expansion expected to eventually tire somewhere down the line given its longevity,” said Chris Rupkey, chief economist at MUFG Union Bank in New York.

Claims have now been below 300,000, a threshold associated with a healthy labor market, for 109 straight weeks. That is the longest such stretch since 1970, when the labor market was smaller. The labor market is currently near full employment.

The dollar was little changed against a basket of currencies as were prices for U.S. Treasuries. U.S. stocks were trading marginally higher.

Last week’s claims data has no bearing on March’s employment report, which is scheduled for release on Friday. Claims rose during the survey week for March nonfarm payrolls, suggesting some moderation in the pace of job growth after two straight months of gains in excess of 230,000.

“The claims data suggest that the labor market remains in solid shape. But it does look like things weakened around the reference week for the March employment report,” said Daniel Silver, economist at JPMorgan in New York.

Also pointing to some pullback in job gains, global outplacement consultancy Challenger, Gray & Christmas reported on Thursday that U.S.-based employers announced 43,310 job cuts in March, up 17 percent from February. Most of the layoffs were in the retail, telecommunications and education sectors.

A survey on Wednesday showed a measure of services sector employment in March slipping, but remaining at a level consistent with growing payrolls. Another report, however, showed U.S. private payrolls surged by 263,000 jobs in March.

According to a Reuters survey of economists, nonfarm payrolls likely increased by 180,000 jobs last month after rising by 235,000 in February. The unemployment rate is expected to hold steady at 4.7 percent.

Thursday’s claims report also showed the number of people still receiving benefits after an initial week of aid decreased 24,000 to 2.03 million in the week ended March 25. The four-week moving average of the so-called continuing claims fell 7,750 to 2.02 million, the lowest level since 2000.